Because natural diamonds are created under an incredible amount of pressure and not grown in a sterile laboratory, it’s no surprise that most diamonds have flaws. A diamond’s “clarity” grade is all about the flaws (or lack thereof). There are two types of flaws:

Inclusions include flaws such as air bubbles, cracks, and non-diamond minerals found in the diamond. Blemishes include scratches, pits, and chips (some blemishes occur during the cutting process, most often at the girdle). Because they are less common, diamonds with no or few inclusions and blemishes are more highly valued and priced.

How are diamonds graded for clarity? 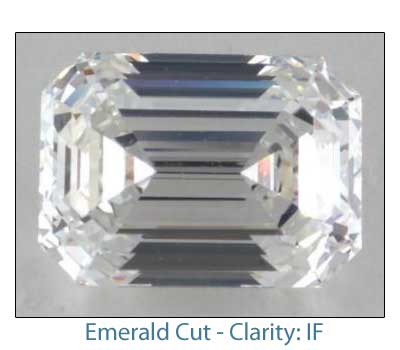 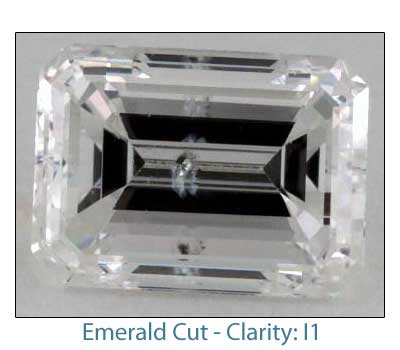 While the presence of inclusions and blemishes do lower the clarity grade of a diamond, they can also be viewed as proof of a diamond’s identity. GIA certificates include what is known as a “plot” of a diamond’s inclusions — think of it as a “diamond fingerprint.” Since no two diamonds are exactly the same, comparing the uniqueness of your diamond’s clarity characteristics with the plot provided on the diamond certificate offers assurance that the diamond you pay for is the same diamond you receive. 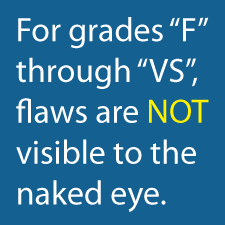 Which Diamond Clarity Grade Should I Choose?

While Flawless diamonds are the rarest, a diamond does not have to be flawless to be stunning.

In fact, until you drop to the “SI” and “I” grades, a diamond’s clarity grade has an impact on the diamond’s value, not on the unmagnified diamond’s appearance.

Diamonds with VVS and VS grades are excellent choices for both value and appearance.

More affordable (and still a great choice) are those diamonds which gemologists call “eye-clean” — diamonds with no inclusions visible to the naked eye.

These diamonds are often found in the SI1 and SI2 and unless the recipient carries a 10X loupe (a strong jewelry magnifying glass), she won’t see the inclusions.

As to I1-I3? Maybe when there’s a diamond grade that’s defined as “you can see the flaws just by looking at the diamond,” nothing more needs to be said.

To be fair, not everyone notices even visible flaws in a diamond. And not all “visible” flaws are “equally” visible — think about the difference between dripping mustard on a starched white dress shirt and dripping mustard on a brightly-colored Hawaiian shirt. Obviously, one shows up a lot more than the other — visible diamond flaws are like that.

But if you choose to buy an I1-I3 diamond (which we don’t recommend), know that some people will look at it and immediately see the flaws.

Read more about the Four Cs of Diamonds